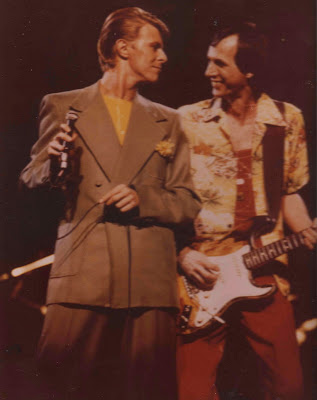 Uneasy Meetings with Gods
part one.

my first tour of europe ever and
as a member the frank zappa band.
although I wasn't aware, this night
brian eno is in the audience.
next day eno calls david bowie
knowing david
is looking for a new guitarist.

Berlin, Germany 2/15/1978
the following night david comes
to the show ostensibly to see me play.
there is a break in the show where I
normally leave the stage while frank
plays an extended guitar solo.
as I'm leaving I glance over
to the monitor board. I'm shocked to see david bowie and iggy pop!
I walk over, shaking david's hand I say, "I've always loved your music".
"great", he says, "how'd you like to join my band?!"
"well, I'm playing with this guy right now..." I stammer, pointing to frank.
"yes, I know, but your tour ends in two weeks and mine begins two weeks later."
we agree to meet back at the hotel after the show.

what followed was like something out of a spy film. david and his assistant coco tried to rendezvous with me without letting anyone in on our little "secret". I suppose the idea was to avoid letting frank know I was being wooed away from his band. I was too dumb to notice. at one point, david, coco, and I stepped into the hotel elevator when no one was around. whispering, coco said, "we have a car out front. we'll meet you there in ten minutes."
david wanted to take me to one of his favorite restaurants to discuss my future. he had lived in berlin for several years. so his driver set off with the three of us in the back madly chatting about songs we'd play and places we'd go. we pulled up to a nice looking restaurant and walked in.
at the table right in front of us sat frank and some of the band!
the jig was up as they say.
can you imagine? how many restaurants are there in berlin?
so we invited ourselves to join them at their table.
feeling slightly uncomfortable david tried to engage frank in friendly discourse.
david said, "really enjoyed the show".
frank shot back, "fuck you captain tom".
"c'mon frank, we can be adults about this, can't we?" david replied.
"fuck you captain tom."
"no, really I'd like to talk."
no matter what david tried, frank kept saying, "fuck you captain tom."
so we left the restaurant.
outside david said,
"that went down rather well, didn't it?"
david, coco, and I spent the rest of the evening at an authentic 1920's private cabaret. david knew the owner and we had a wonderful time. some kind of girls gave us a show. the marlena dietrich owner of the club awarded me a lifetime membership card.

a few days later as frank sat at the back of a bus we were riding I approached him. I knew frank was planning on editing his movie baby snakes after the tour which would take perhaps 3 or 4 months. I explained it might make more sense for me to tour with david during that time rather than languish on frank's payroll. in his customarily frank fashion he reached out, shook my hand, and wished me luck.
Posted by adrian belew at 8:30 AM

other blogs of interest